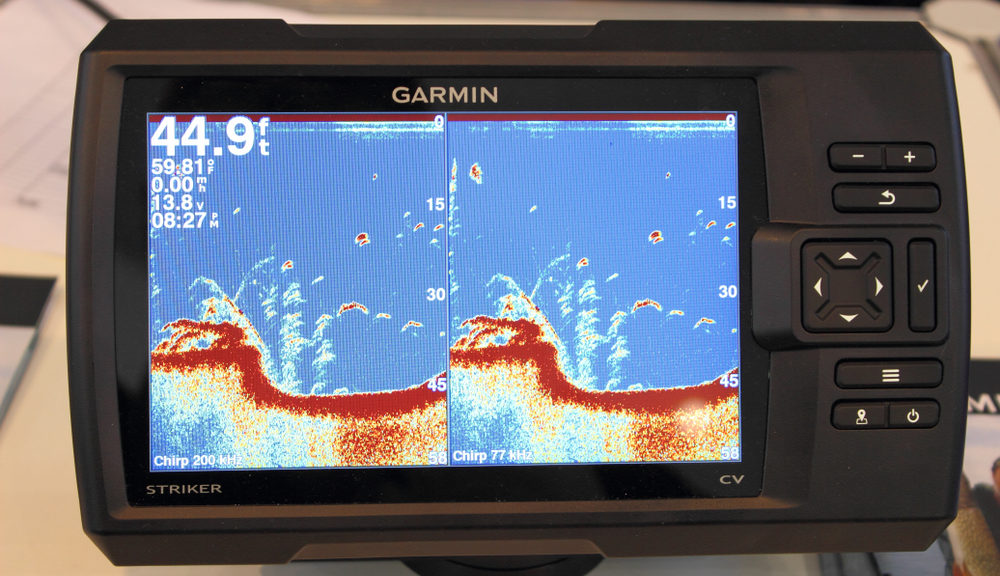 Boats are packed with screens these days. If you look at the front end of any boat—from a little tinny to a big prawn trawler—you’ll likely see a bunch of screens showing all sorts of unusual images. Among those screens is one of the most important boating accessories available: the depth sounder.

Depth sounders are a must-have for practical and safety reasons, but they’re also a fisherman’s best friend. If you’ve just got a new boat, or are thinking about accessorising your old one, chances are you’ve already seen the array of depth sounders on offer. So how are you meant to choose one?

Depth sounders are expensive and high tech, so the choice can be daunting. But with this simple guide, you can easily choose the right depth sounder for your needs.

What are depth sounders for?

Before we go any further, what are depth sounders actually for? There’s a common misconception that they’re a fishing tool, which is true in many ways. But that’s not why depth sounders were invented. First and foremost, your depth sounder is a navigation tool, and it will ensure that you don’t find yourself stranded in shallow waters.

As the name suggests, depth sounders display the depth of water you’re currently in, on the screen at the helm of your boat. Of course, it didn’t take long for fisherman to work out that this is a massive advantage when you’re looking for fish. Like people, fish congregate around structures and when you can see the depth changing constantly on your screen, it’s easy to locate structures in the water, and therefore, much easier to find fish. As a result, depth sounders are often referred to as “fish finders.”

How do depth sounders work?

Depth sounders have a literal name: they “sound out” the seafloor using sonar pulses, similar to the way a dolphin or whale. Although the screens may look like the most expensive component, the most costly part is the transducer, which sits inconspicuously below the water line.

These days, depth sounders include large high definition displays, rapid pulse rates, and images so clear they could be mistaken for an MRI reading. But it wasn’t always that way. Not so long ago, depth sounders didn’t have screens at all. Instead, they had a roll of paper and an ink pin. The roll of paper was much like a roll of receipt paper in an eftpos machine, while the ink pin was like the arm on a record play. The pin would map out the shape of the ocean floor onto the paper, which would roll out as the boat moved. The end result looked a bit like a heart monitor, or a seismometer that you would see in the movies. Needless to say, those models weren’t so easy to use, which is why the technology was updated.

Not only do new depth sounders come with high resolution displays, but they also offer improved features and greater accuracy. Take speed, for example—early models of depth sounders used small water wheels to gauge speed; the wheel would spin as the boat moved through the water, and the rate of its revolutions would be used to calculate speed. But that system was rudimentary and prone to inaccuracy, especially in debris-filled waters or at higher speeds.

Today, depth sounders are GPS compatible, which allows them to calculate speed accurately using GPS technology. They are also able to offer depth-sounder GPS combinations, which display both aerial maps and depth imaging on single or split displays.

With that technology, marine navigation is easier than it’s ever been.

Despite so much technological advancement in the world of depth sounders, one feature stands above all else: side scan technology. Side scan depth sounders are relatively recent, and they provide some of the most accurate displays available. This makes them perfect for lure fishing. When you’re lure fishing, accuracy is everything. It’s vitally important that you can get your lure right into the strike zone, whether it’s a snag on the river bank, a pylon in the bay, or a pinnacle on the deep sea floor. But locating those strike zones has traditionally been challenging, given that conventional depth sounders operate on a solely vertical plane.

That’s where side scanners differ; by breaking from the vertical plane, side scan depth sounders are able to map a wider area of the sea floor. That means that they can detect fish activity and structure that aren’t only beneath your boat, but also on a horizontal plane from it. The side scan approach also allows for enhanced accuracy, such that experience fisherman can sometimes detect not only the location of a fish, but the species as well. Barramundi are a prime example: their distinctive shape is reflected on quality side scan images, so that fisherman can tell when there’s one in the strike zone. Take a look at this picture, as an example: 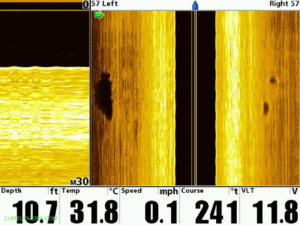 If you’re primarily a shallow water angler, then you won’t need to worry too much about image quality or echo. Higher quality sounders often work better in deeper waters, as they’re able to minimise interference and maintain contact between the transducer and the pulses it emits.

However, in shallow waters of ten metres or fewer, there’s less chance of interference simply because the transducer is closer to the bottom, and its pulses don’t need to travel far before returning. Of course, you’ve still got navigation to consider, but even entry level sounders offer quality performance of sufficient reliability for shallow water navigation. Unless you’re looking for a side scanning model, to really take your fishing to the next level, we would recommend a good quality but affordable model for shallow water uses.

Your depth sounder installation will be important in shallow water, too, given that poorly located transducers can be damaged by sandbanks or underwater structures. Generally, they’re best mounted beside your transom at the rear of your boat.

If you’re an offshore fisher who prefers to drop a line in fifty metres or more, then you’re going to need a high quality sounder. When your transducer emits a pulse in fifty metres of water, that pulse needs to travel a total of one hundred metres before your sounder can tell you how deep it is. That leaves opportunity for interference to spoil your image quality, and even distort your sounders readings. High quality models counter that in a range of ways, including emitting more frequent pulses so that your sounder produces more responsive readings and images. The trade off is cost, with high quality sounders starting at a few thousand dollars, and travelling sharply upwards from there.

Some brands to start off with

If you’re looking for a good place to start in your search for a suitable depth sounder, you should consider brands like Garmin, Lowrance, Furuno, and Hummingbird. These brands are well established and well regarded, with options for entry level estuarine anglers, through to die hard offshore fishers. As you get into the swing of things, you’ll learn the tricks to your sounder, and eventually you’ll be able to convert that knowledge into an icebox full of fish.